From Saturday to Friday in a Second

Posted on November 9, 2013 by planetlars

This morning I woke up pre-dawn for my 0400 hour watch duty; at the helm steering the Bark Europa at a bearing of 100 degrees in eighteen knot winds and a moderate northerly swell. We’re a day south east of the Chatham Islands and a great and unexpected visit that was. Being at the helm is a great responsibility to have, the First Mate ahead in the wheelhouse keeping you honest and the feel of the lurch and strain of the ship – her hull heaving in the water and the masts and sails taut – in your hands as you turn the spokes on the giant wheel, marine elements all around you. We were out of the massive blocking high and heading south and east to its lower limits toward the international date line – pushed way east by the geopolitical dictates of New Zealand and her outlying territories (viz. Chatham Islands).

And then it happened. At 0719 hours this morning – being Saturday 9th November – we crossed the most vexing of anthropocentric lines upon this planet, the International Date Line; at 174.5 degrees West. And suddenly within a heave and a lurch of a swell under the hull of the ship and passively to the sound of the whine through the lines (ropes), we went from being fourteen hours in front of GMT (a day ahead) to being ten hours behind. In that sea-bound moment, the clouds hurtling low around us, it was suddenly 0719 hours plus a few seconds on Friday 8th November. Groundhog Day you might say in homage to all things Bill Murray. But the playlist didn’t kick over to ‘I Got You Babe’ by Sonny and Cher. And we continued as before, but then again, not quite. 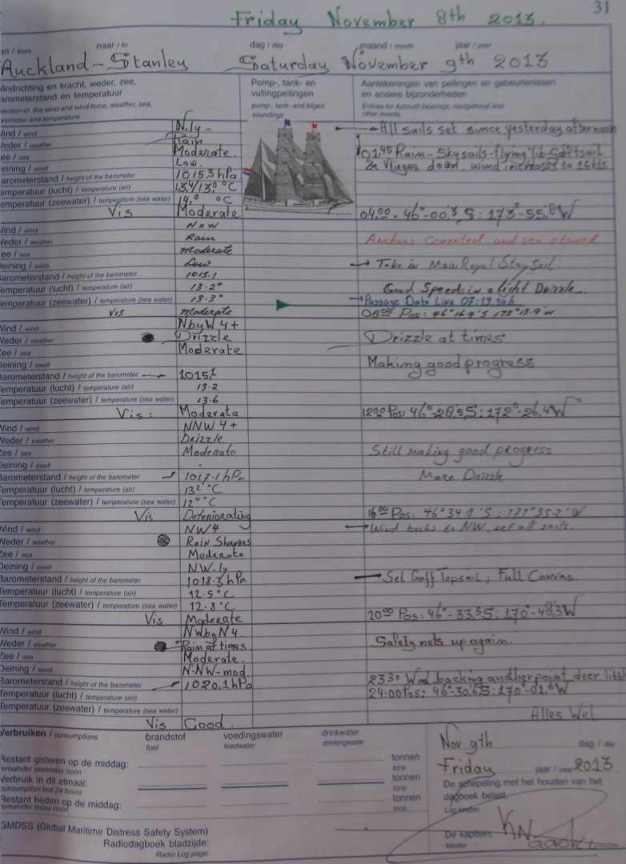 The 9th of November happened to be voyage crewmember Stephen’s birthday. And so today he woke to a galley and mess decorated for a birthday breakfast by the crew, the deep stained timber wall panelling and ceilings bedecked with colourful flags and bunting. “Hip hip hooray!” we all cheered as we periodically clutched the seats, walls and tautly strung ropes to remain upright in the lurching motion of the ship. But moments later we crossed the date line and suddenly his birthday no more it was! Twas now the day before his birthday. But we’ll leave the bunting up as in just under seventeen hours it will be his birthday again. Weird! I adjusted my watch. It was the first time I’d ever legitimately moved its date back without also adjusting the hour. Again, weird!

Later in the morning, young Daniel, one of the voyage crew, the slightly nerdy-looking whiz kid with matted hair combed down on all sides, kicked off the Europa guest lectures. He is not only a sailing enthusiast but also a budding nuclear physicist. We all – minus the watch on duty – crammed into the deckhouse to hear his talk and before too long the humidity was fogging up the windows, obscuring the rollicking overcast day outside.

We began with the basics of atomic theory and I was enjoying improving my populist knowledge on quantum mechanics with the expert in our midst, refining my theory and seeing the proofs unfolding. But our collective contentment was curtailed when, twenty minutes in, young Dan paused mid sub-atomic equation, and looking slightly bemused, apologised that he was feeling quite squeamish and that he may have to postpone the lecture. At which point he promptly stood and clasping the bench tops lurched his way out of the deckhouse to the port side and discreetly ejected Stephen’s birthday breakfast overboard into the foaming South Pacific Ocean.

It may be Groundhog Day after all. A notice was left on the deckhouse chalkboard that Dan’s lecture had been postponed due to illness. Not to worry, it’ll be Saturday 9th November again tomorrow morning and he, like the Birthday Boy and indeed the rest of us, can have a chance to start afresh. Such are the peculiarities of tall ship travel on the high seas on the Far Side of the World.