At around 20:00 hours last night (15:00 hours AEDT on Monday 18th Nov), our ‘Day 18’ of sailing since Auckland, we reached the approximate half-way point to Stanley. That is, if the trajected route onwards is what we indeed follow, which usually isn’t the case, as the winds change and new courses are set affecting the total miles required to travel; which of course could be more or could be less. Nonetheless, for good ship Europa, it was the first time that the Captain calculated the Half-Way point, and an announcement was made throughout the ship and a loud Huzzah came from the ship’s belly.

‘Alles wel’, as the Dutch say. Only one major injury – a knife cut to Kiwi Mike’s left hand who was doing some rope maintenance work, and which the ship’s doctor Leen helped along with five a quick five stitches.

Today we saw the sun for the first time in over a week, but by afternoon the low greyness of the 50s latitudes returned. Quite a contrast to the first few weeks of my voyage. Moving into the latitudes of the 50s has brought colder weather and overcast conditions since the relatively warmer airs of the north interact with the colder airs of the Antarctic Convergence zone. As such fogs have beset us for a few days, with horizons being closed right in around us on the foaming seas.

After riding on the southern edge of a huge cross-Pacific High – unseasonal for this time of year – a depression is predicted to jut up from the south by Wednesday this week, with 40 knot winds predicted. We had nothing more than 25 knots since Auckland, though I did experience a big squall with 35 knots across the Tasman on Tecla. So we’re preparing for rougher seas, closer to the true character of the Southern Ocean.

Sleeping at constantly odd hours is still a trick to contend with. I recovered lost sleep today after failing to get a nap in during a long day yesterday from sun up till 0400 the next morning. 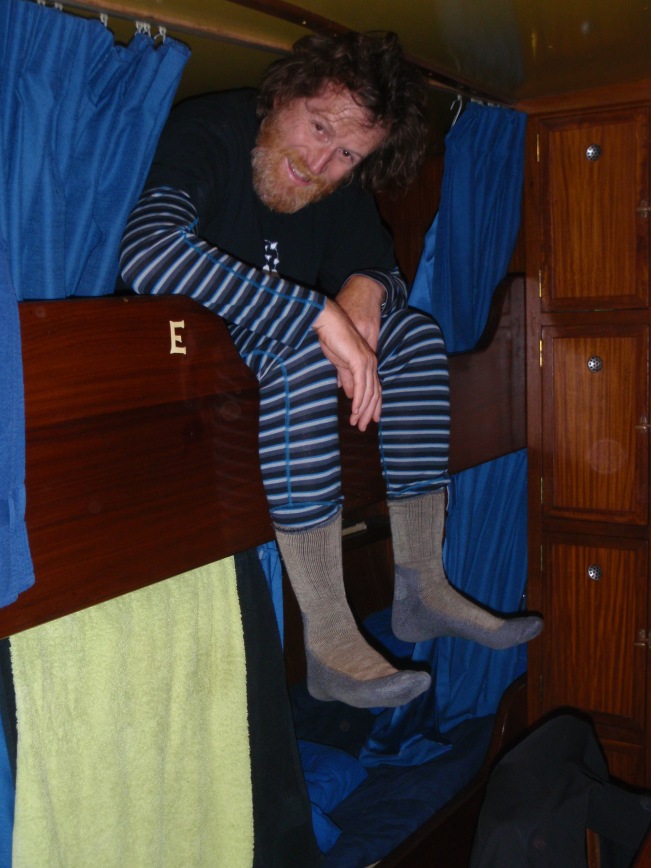 At midnight last night my White Watch helped the signing-off and by then red-eyed Red Watchers, wear ship to the southeast from our ENE course, which required a lot of able seamen and women scattered at all points on the ship ready to heave or release ropes, and furl sails, re-orient yard arms and unfurl sails again. Some sails, like square sails are simply clewed up. Others, like stay sails, might require physical handling to bunch them up and shove them through ship’s rigging to be accessed from the other side. Lot’s of shouting, calling of orders, while the Captain signals and berates from the bridge (read my cabinmate Rod’s piece on the Europa website Blog ‘Klaastrophobia’). All the while the ship barrels along, with giant rolls and lurches and water from the dark frigid Southern Ocean gushing through the gunwales across the wooden-planked deck and across our gum-booted feet. Fun, yes. But when the body is sleep deprived, it’s a challenge to be in the right place and remember all that training on the location of all the lines on the pin rails.

We’ve had some fun competitions designed to force us to ‘learn the ropes’ (now I know where that saying comes from!), like where the Upper Tops’l (topsail) clew lines are, or where the T’gallant (Top Gallant Sail) sheets are, or where the tacklines for the Forecourse might be, and what distinguishes the fastening points for the the halyards for Royals or Sky Sails from sheet, clew or bunt lines. Madness? Yes! But ingenious indeed! And it’s been a sailor’s world for so long. And it works.

To feel our constant easterly movement captured by the ‘windjamming’ effects of this towering forest of canvas alone in the ocean is a wonderful feeling. And to know that the Wandering Albatross is our constant companion in this most wondrous of endeavours, to harness the free winds in our large wings, as we both make our ways east toward the islands off Tierra del Fuego. Me, for reasons as multivariate and as complex as the human condition since time in memorial. The albatross, for the biological imperative of breeding and assuring itself of plentiful post-breeding food sources from the bountiful, cold, nutrient rich, up-welling waters of the Humboldt Current. No wonder the Bark Europa owners nick-named her the ‘Ocean Wanderer’.