A True Rounding of Cape Horn

Everyone on board Bark Europa participates in the watch system and by doing so learns how to sail a square-rigger around the Horn. But in order to become an official Cape Horn sailor there is something extra one must do.

Back in the days when sailing ships sailed the old trade routes, Cape Horn was an infamous part of every sailor’s life. Many sailors reached rock-bottom in the harsh weather conditions that prevailed either side of the Drake Passage. Nonetheless sailing around Cape Horn was considered quite an achievement.

Bark Europa sails into the sunset, and perhaps another Cape Horn Rounding…

In 1933 a group of French sea captains that had all sailed Cape Horn established the Amicale des Capitaines au Long Cours Cap Horniers (AICH). Their aims remain the same today:

“To promote and strengthen the ties of comradeship which bind together in a unique body of men and women who embody the distinction of having sailed round Cape Horn in a commercial sailing vessel, and to keep alive in various ways memories of the stout ships that regularly sailed on voyages of exceptional difficulty and peril, and of the endurance, courage and skill of the sailors who manned them.”

The Dutch section of AICH welcomes new Cape Horn sailors and honours them with a token certificate of achievement. To be eligible for this certificate one must show perseverance and actively participate in the ship’s watch system for an extended period of time on a sailing ship rounding Cape Horn by sail from 50° South in the Pacific Ocean to 50° South in the Atlantic Ocean (or vice versa). The length of the voyage should be at least 3000 miles under sail alone.

Between October and December 2013 we achieved this minimum. Indeed we achieved a lot more, having sailed all the way from Australia to the Falkland Islands under sail alone. As such we became eligible to join this elusive and exclusive club of Cape Horn sailors.

There are immense privileges to sailors who have rounded the horn. They include being allowed to dine with one foot on the table. If one has rounded the Cape of Good Hope as well then such a sailor would be permitted to put both feet on the table.

In terms of tattoos, one may obtain a tattoo of a fully rigged ship once a true rounding of Cape Horn has been achieved.

And finally, in order to be able to “spit into the wind” one would need to have made three true Cape Horn roundings (NB: I tried with just one rounding under my seaman’s belt; it failed dismally!).

One of the true Cape Horners was Captain James Cook, master of the Endeavour 1766-71 who sailed around the Horn in both directions. Not only could he spit into the wind, rumour has it that he could piss into the wind too!

Returning now to the certificate of achievement; there is one logistical issue to reckon with – one has to collect one’s certificate in the Dutch city of Hoorn in person.

My Cape Horn Certificate awaits my collection. And I can feel another adventure brewing.

The chart of our daily plotted positions of the three Dutch Tall Ships, October-December 2013

A Longing for Longitude 67 West

Thirty nights and thirty days have we travelled under canvas-filled sails since Auckland. And again the mist closes in as I stand lookout ‘pon the fo’c’sle deck looking out t’ward sea. Antarctic fulmars now join the petrels, prions and albatross in their low gliding dance between crest and trough; appearing and disappearing between a see-sawing weave of chaotic crest lines, each subsequent swell face progressively greyer on out though the diminishing lines of perspective.

We are 120 nautical miles west of the longitude that runs through Cape Horn: 67° 15.5’ W. And we’ve slowed right down. The gale that carried us in its rough embrace over the last few days has moved on. We perambulate upon a sloppy sea. And in such a fashion, with sails increasingly set, we hope to ‘Round the Horn’ today and in so doing cross from the Realm of the Pacific to that of the Atlantic before nightfall. The Captain has assured us that the Europa’s Great Horn will sound; and that we should all gather on deck to toast in unison to our good fortunes, rain hail or shine. But we’ve to pass the small island group of Diego Ramirez first. And I cast my eyes eastward into the mist from the fo’c’sle deck once again. 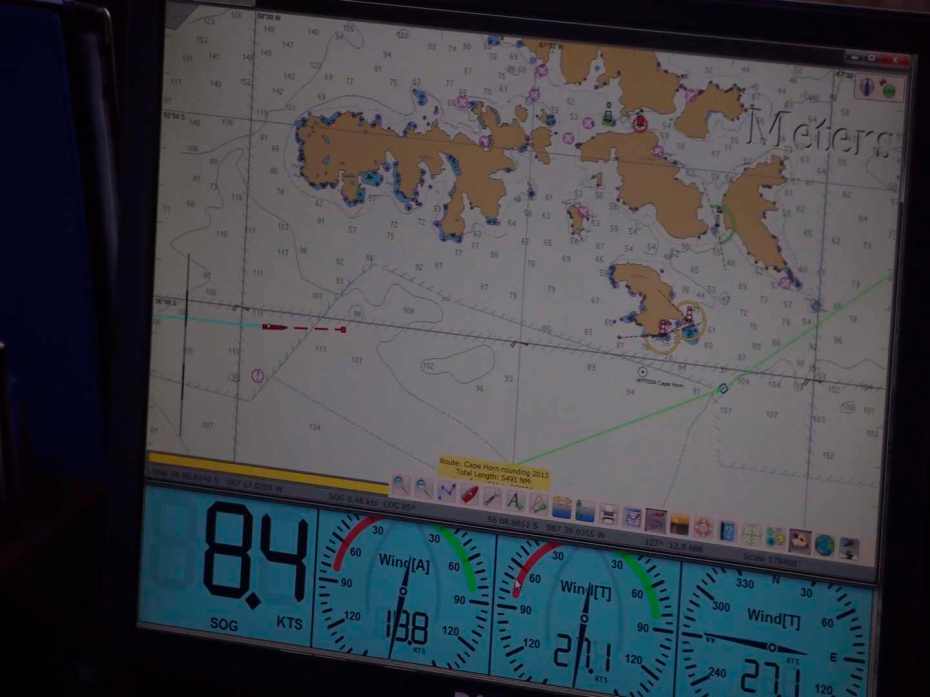 My long-standing familiarity and love of The Americas is challenged. I cannot see her but I sense her enormity looming and imagine the great north-south continent of the western hemisphere lying just a few hundred kilometres to my north. Yet it is as if this permeating fog alone prevents me from seeing her; and that if it lifted I should see first hand the remnants of her glorious Andes, taller and sky-bound in their tropical and sub-tropical latitudes, now left drowning in the circuitous fjords and glacial fingers of the Patagonian south.

We are now on Bolivian Standard Time, one hour behind Chilean Summer Time and Falkland Island Time. We are already five hours ahead of Alaskan Time. The continental mass of the Americas has been pulling ever closer over these last few weeks, with a steady loss of an hour every two to three days. We are now more than half way across the traversable terrestrial time zones of the Americas.

Ship time is 0745 hours and I’ve been on watch since 0400. The sun rose at least two hours ago. At a little over 56° S the Southern Summer light pervades this fog-bound world, while the sea temperatures continue to drop. At a little over three degrees Celsius we’re still a ways off the Antarctic Convergence Zone, where the cooling Southwest Pacific Ocean waters sink alongside the denser more saline waters emanating from the southern sea ice packs.

Should indeed these pallid grey curtains lift and I indeed see the remains of the dissected Andes diminishing inexorably in size toward that one famous rocky islet at the extreme edge of the Land of Fire, might it too be possible to distinguish the amassing of her waters as they fight for space within the Drake Passage? From out here amidst the gathering steel grey waters of the circumpolar current it’s hard to manufacture an answer.