Beating into the Warming Wind 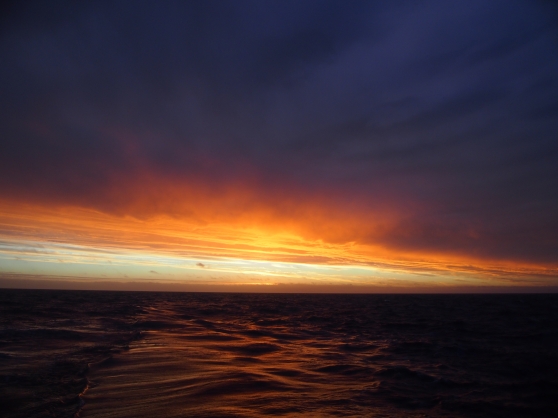 The last of the cool late summer southern sea evenings, Southwest Atlantic, between Falklands and the River Plate

The final leg of my 16,000 kilometre ocean voyage from Sydney, Australia to La Colonia, Uruguay started on 20th December 2013 in Stanley, Falkland Islands / Puerto Argentino, Las Malvinas. Behind me now was the completion of a ‘True Rounding of Cape Horn‘ (i.e. a minimum of 3000 nautical miles under sail from 50° South in the Pacific Ocean to 50° South in the Atlantic Ocean – see previous blog http://wp.me/p2EUa2-7Y) and the final leg had the singular distinction of a northerly trajectory in difference to months of easterly progress.

Starting off cold, windy and overcast we left that slice of British sovereignty and stubbornness, the Falkland Islands and its hundreds and thousands of windswept and sand-blasted penguins, seals, sea lions and breeding seabirds. We headed into increasing head winds; stiff northerlies. And we were forced to set the Iron Sail – the engine. We powered north into a big mist half way between the Falklands and the River Plate, our surrounding temperate airs being collided by the hot humid mass from the summer-soaked continent of South America to the north. We then started the slow process of peeling off the layers. The layers and layers that I’d come to consider part of my very self: woollen thermal underwears, long cotton mid-layers, extra mid-layers of cotton, followed by woollen jumpers and then the outer layers of wind-proof and water-proof fabrics.

Christmas Eve came and went while on watch on a steady calm ocean, still cool enough to keep most of one’s layers on while up on deck. And the colours in the evening sky were a perfect accompaniment to dream of the peace we all wish for at this time of the year. On Christmas Day we all gathered for a Christmas Dinner of the Crew and taking advantage of a moment on the high seas to let down our collective hair we all got a bit tipsy. Captain Gijs took control of the helm with his father Jan, allowing the rest of us a moment to cease our duties.

In the post-Christmas days that followed, warmer and warmer it became. Small whiffs of humid warmth, subtle in their appearances, would excite the skin on our hands and faces, cut short by the still lingering frigidness of our old friend the southern salty sea winds. A tern appeared and chased our mast, at last settling on our bowsprit and I was reminded of the messenger tern that fare-welled us when we left New Zealand at the end of October (see http://wp.me/p2EUa2-5B). I took it again as a good sign for Cape Horner like me.

A tern pauses on Tecla’s bowsprit to greet us as we approach the mouth of the River Plate, Argentine continental shelf, Southwest Atlantic Ocean

Then three days south of the River Plate the heat finally broke through the thermo-tone and suddenly we were all in shorts and dousing buckets of warm salty muddy ocean waters over our heads. The ocean colour had changed. Having passed over the Argentine Abyssal Plain (at an average 5000 metres depth) we’d sailed over that steep incline rising up onto the Argentine continental shelf (100-150 metres deep). Gone were the clear crisp deep blues of the Southern Seas. The turbid brown of the River Plate was upon us. And the sea and ambient air temperatures climbed and climbed. I burnt my feet under the sun on the deck. We considered sleeping on the deck at night, such was the heat below. And we started seeing the first land insects. And for the first time in months giant container ships sullied our horizon vistas and airplane contrails coursed the cumulonimbus clouds above us. This was somewhat of a shock to my gentle sea-pulsing person.

A cricket suddenly appears and the land is yet to come into sight, River Plate mouth between Uruguay and Argentina

A day before we entered the River Plate we were informed via radio that the Buenos Aires Port Authority wanted to charge us US$10,000 to enter. In mid-December the Captain had completed the necessary paper work with the Argentine authorities prior to arriving at the Falkland Islands / Las Malvinas. Problems arise for vessels leaving the Falklands wishing to enter Argentine continental ports. Without prior permission from the Argentine Government a vessel coming from the Falklands is considered to have entered Argentina illegally and without the prior approvals and consents. We had these, but another way to play international geo-politics is to simply charge exorbitant fees.

My Tecla sailing colleagues witness one of the last oceanic sunsets on this my final leg
Mouth of the River Plate, between Uruguay and Argentina

The Captain was not keen on paying these fees and so we changed tack and headed across the now shallower River Plate waters (10-15 metres deep) to Uruguay and the World Cultural Heritage-listed port of La Colonia del Sacramento (originally a 17th Century strategic Portuguese fort in the colonial days of the Continent). It was piercing hot (+40 degrees) and sweat-forcingly humid when we arrived. Neighbouring Buenos Aires was having power failures due to high summer loads on its failing electricity grid; chaos for them during this end-of-the-year festive season. Uruguay, relaxed and comfortable in itself, was coping much better. We anchored just offshore. It was Sunday and Uruguayans were variously swimming, fishing, zooming on jet skis or sitting under hundreds of umbrellas drinking beer. While Captain Gijs headed ashore alone to the small yacht club mariner in the zodiac with all our passports, we set about celebrating our arrival. An hour later Gijs climbed aboard with stamped-passports in hand. We were now officially in Uruguay. Jan, Tecla’s owner, clapped his hands and bowed down low and reverently to the big old ‘iron sail’ – still ticking and popping and hissing below in the bottom of the ship. This was one of the longest sustained uses of the motor in Tecla’s circumnavigation of the planet’s oceans. It had powered us most of the way from the Falklands and he was thankful for its flawless duty in transporting us from our southerly place of solace.

It was hard to believe my sea journey was at an end. The land now beckoned. And thinking of what the first ship-load of Australian utopian colonists did when they arrived on Uruguay’s exotic shores 120 years before I immediately fixated upon striking ashore and tasting some ice-cold beer.

But first priority was a dive into the fast flowing current of the River Plate. And then some aloe vera applied to toasted flesh.